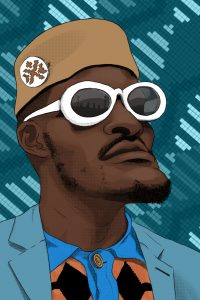 Maxhosa by Laduma has been showing the world how Africa glows with pride. I learnt this on my first visit to the Johannesburg-based factory of the knitwear brand in 2018. In fact, “knitwear brand” makes me cringe. Maxhosa by Laduma stands for more. There is an artistic flair, sure, but something more intriguing than the craftsmanship is a sense of fulfillment in just… being, about it. I’ll attempt to share my Maxhosa experience, however, it’s unlike anything anyone can anticipate from a single encounter.

Over fifteen years ago in eBhayi, Port Elizabeth, a mother dedicated her time to teach her son to hand-machine knit. Within nine months of his apprenticeship the boy would achieve his milestone; successfully knitting his first jersey. Tragically, shortly after this accomplishment, his mother passed on.

Inspired by his Mother’s craft and the Xhosa artworks that have come before him, Laduma Ngxokolo founded Maxhosa by Laduma. Since age fifteen, he has been weaving his vision of an Africa embraced the world over.

Ngxokolo’s mother was a knitwear designer during the eighties. His father composed music, sculpted, painted, acted and presented on TV while holding a position as a school principal. It was his father who upon him would bestow the name Laduma, name of the Mpondo’s.

“I’ve been knitting since grade eight,” he says softly, “that’s when I discovered that there is something special about the formation of fabric.” 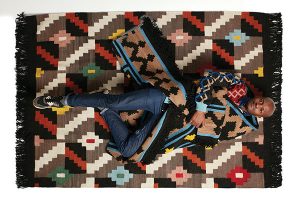 Ngxokolo admits that his first love was design. A quick glance on the table on my left, I see wrapped cardigans stacked neatly on top of each other. Their maroon and gold exes and chevrons jump off at the corner of my eye, creating a repetitive movement across the table, ending in one whole canvas of bold geometric waves. It is clear to see that Ngxokolo’s perception of form and colour was nurtured at a young age having chosen design, graphic art, music and maths as subjects in tenth grade. He went on to graduate at Nelson Mandela University, attaining his four-year degree, specialising in knitwear. That is when he began sewing the first seams for Maxhosa.

“I saw a bigger picture than Xhosa nations and its people,” he says, as if summoning the words from over my shoulder, “I saw a new representation of Africans.”

It should come as no surprise that Port Elizabeth based Nelson Mandela Museum boasts the biggest Xhosa bead wear collection in the world. At a time when South Africa had the world’s attention as the FIFA World Cup hosts in 2010, Ngxokolo gained access to the exhibition and took precise stock of the beadwork and motifs on display. Above all, he learned that Xhosa people have about two hundred clans; amaMpondo being one of them. He draws a slow breath as he turns open his hands, counting his fingers with his eyes. He begins naming a handful of clans off the top of his head and linking them with colours and styles they associate with.

Today Maxhosa by Laduma combines ten colours, borrowed from some of the clans, to create its signature style. “It was around 2011 when I created my interpretation of how I see Xhosa people dressing currently and in future. I added the prefix Ma- to Xhosa to represent the people” he says.

Maxhosa geometric textiles cover every inch of the studios in the factory today. There are jerseys – long and short, skirts and dresses, socks, pants, scarves, jewellery, rugs and even magazines on display. Staff members have their hands full. There’s a buzz in this studio decorated with smiles and chatter. The grinding noise of the machines keeps away from the door leading to Ngxokolo’s office. 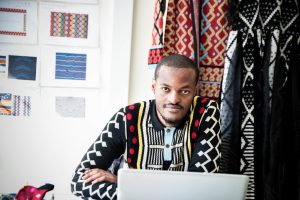 When the company launched it had only a men’s line of cardigans, crew necks, waist coasts and V-necks. Ngxokolo did all the knitting, from programming of the patterning, sizing and cutting. However, making two jerseys a month didn’t cut it. He began outsourcing production to satisfy bigger volumes. In 2017, Maxhosa by Laduma was able to buy a factory from one of its suppliers. “The first four pieces I made I’ve archived. I’ve only sold one; still trying to buy it back”, Ngxokolo smiles.

Ngxokolo’s eyes are also set on Maxhosa by Laduma becoming a lifestyle brand which is easily identifiable with fragrance and jewellery, even restaurants and boutique hotels. The highlight recently being the launching of the new store at Mall of Africa in Midrand, north of Johannesburg. 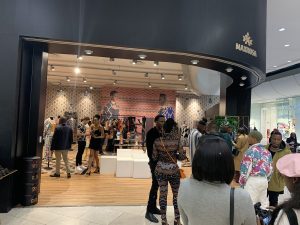 “Not everyone wants to wear a lot of colour. As far as interior décor is concerned, people are not restricted with what they put around their homes. With our rugs, we get conservative people who like to make a statement in their homes” he says.

Visual impact takes precedence at Maxhosa by Laduma, giving the brand its esoteric appeal. The logo is unified with a symbolic X flanked by chevrons. It was inspired by the letter X which has a jolting effect on people who are given the opportunity to pronounce its clicking sound in isiXhosa. Above the X is a diamond-style motif typically found in the bead works of Xhosa artworks.

This is the undeniable knitwear marked in exes, chevrons and diamond shapes which capture the interest of fashion enthusiasts around the world. It’s easy to spot the iconic maroon, silver and gold colours against the neutralising black, white and cream.

Maxhosa by Laduma shines a light where there is darkness, encouraging us to stand boldly together and welcome others to join in our delight.

If my first encounter with Maxhosa is anything to go by, I’m inclined to tell you, you would walk away not the same as you came. There is an intangible, unforgettable mark which impresses itself upon you and confirms you as a people of the world.

“We want all people to see how we celebrate Africa through our work while remaining accessible to our people” says Ngxokolo.